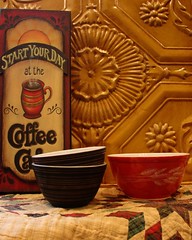 I love having pretty bowls & platters to use in our kitchen.

Recently, I decided to keep my eyes open for some nice Pyrex bowls. I remember my mom & grandmothers using Pyrex bowls in their kitchens, but the kitchen decor of my grandmother’s day, came in shades of olive & burnt orange (I know it won’t be long before these shades return to our homes, but right now, the colors are a bit different ;). But, when I realized how many pretty colors & patterns there were to choose from, I knew that I could probably find some that would fit into my current kitchen decor.

I went to a local antique store, where you can find all sorts of things for every room in the house. There, I found lots of different Pyrex pieces to choose from. The prices ranged from $2.50 – $8.00 for the larger bowls. These prices were much cheaper than the new bowls that you can buy in the store, and I love filling my cupboards with history & style! 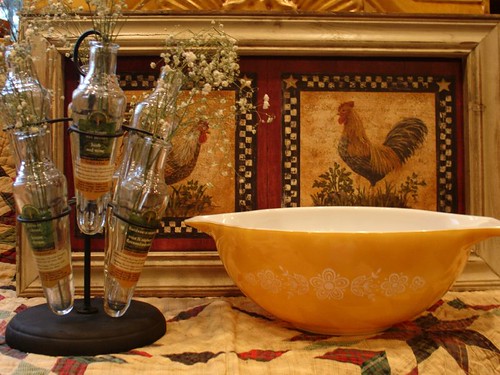 Here’s a snippet of history from the Pyrex website:

” Back in the early 1900’s, Corning Glass Works was working on a request from the railroads to produce lantern glass that would not break when the hot glass was struck by rain or snow. In response to this request, Corning developed globes made from low-expansion glass that could withstand the abuses of weathering and handling which readily broke the flint glass globes. Ironically, the shatterproof lantern globes generated were so good that Corning’s managers witnessed a decline in sales of replacement globes.

This super-tough “fire glass”, as it was called, was resistant to temperature fluctuations, chemical corrosion and even breakage. In July 1913, a series of events involving Bessie Littleton, the wife of the company’s newest scientist, forced Corning managers to focus their attention on the consumer venture. Apparently, Mrs. Littleton had used a Guernsey brand casserole only twice when it fractured in the oven. Knowing the strength of the glass her husband worked with on a daily basis, she implored him to bring home a substitute from the Corning Glass Works plant. He returned the next evening with the bottoms of two sawed-off battery jars made from low-expansion glasses. Mrs. Littleton cooked a sponge cake in one of the surrogate baking dishes. She noted several remarkable findings:

– The cooking time was shorter
– The cake did not stick to the glass; it was easy to remove with little adhesion
– The cake was unusually uniform
– The flavor of the cake did not remain in the dish after washing
– Watch the cake bake & know it was done by looking at the underside

Mr. Littleton brought his wife’s creation to work the following day. Laboratory researchers inspected the cake, which was a “remarkable uniform shade of brown all over.” The men deemed it delicious and very well baked. Thus began a two-year process to perfect this new invention. The notion of baking in glass was a whole new concept to the public. In 1915, a wondrous new line of “glass dishes for baking” appeared in the nation’s hardware, department and china stores. On May 18, 1915, Boston department store Jordan Marsh placed the first PYREX bake ware order. “

This is a set of blue & white bowls that belonged to my grandmother. My parents just gave to me this week, but I told them that they should have saved them for my Christmas gift! I already had the small rec. shaped dish, and it matches so perfectly! 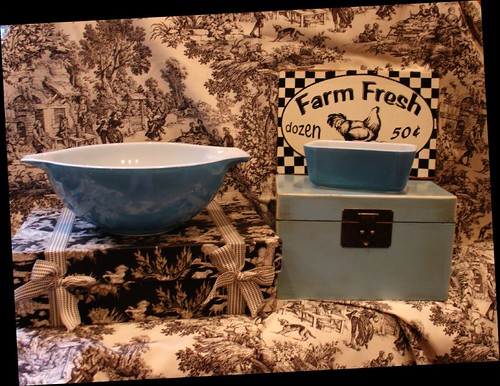 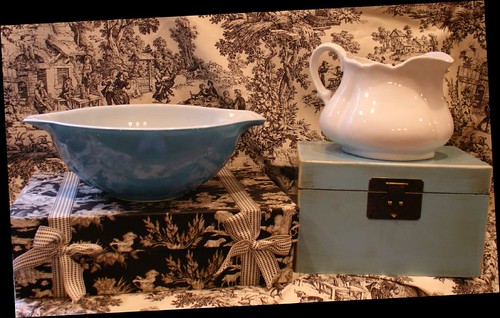 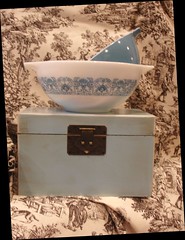 This is why I’m falling in love with Pyrex 😉

– Easy to clean
– Said to be unbreakable, a necessity during the Great Depression & World War ll
– Economical
– Absorbs heat waves which speeds up the cooking process & saves energy
– Bake & serve from the same dish
– Can use in the refrigerator, freezer, and microwave
– Bread supposedly bakes an inch higher in Pyrex!
– Comes in many shapes & colors
– Does not stain – or retain food odors
– Even antique pieces are still readily available – due to it’s durability
– An estimated 75% of all U.S. households own Pyrex

I encourage you to keep your eyes open! For a few dollars, you might find some beautiful dishes, lots of style, and wonderful history for your kitchen!

… Oh the stories those dishes could tell 🙂

PYREX is a registered trademark of Corning Incorporated.
* You can find lots of history at their website: http://www.Pyrex.com