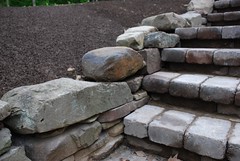 When we started working on the landscaping for our cottage in the woods, we were unsure of how to handle the hill that joined the side of the house with our country lane.

After looking at the size of the project, the price that it was surely going to cost, not to mention not knowing exactly how to go about accomplishing the project, I was afraid that we were going to have to settle for something less that what we really wanted.

But… after going through lots of pictures, and discovering some new ideas to build a set of stairs ourselves, we finally had a new option!

You see, initially we tried to build the steps from stone that we gathered from around the property, but no matter what we did, we couldn’t get them to lay even. Because we didn’t want anyone to catch their toe & trip while climbing the stairs, we had to find another solution.

And we finally it!!!

This would not only allow us to have nice even steps and still give us the look that we wanted, but the cost would also be very low, because most of the supplies would be coming right here from the land!

You can see where my husband grabbed his trusty shovel and starting roughing in the steps into the side of the hill. You can also see all of the rocks that he was pulling out & putting aside for later use. 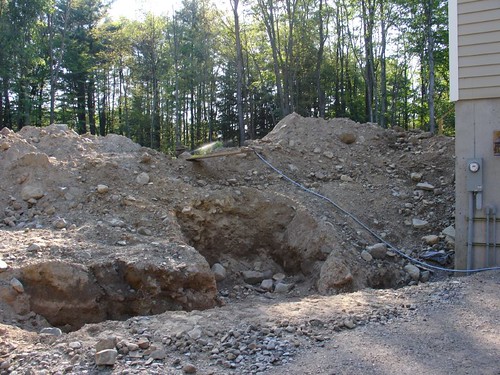 After the steps were laid, we starting laying out the stone walls on each side to keep the soil from falling out. We also decided that it would be wise to lay landscaping cloth behind each row of stacked stone, then pile the dirt up behind it. This would keep the soil from simply washing through the front of the walls each time it rained. 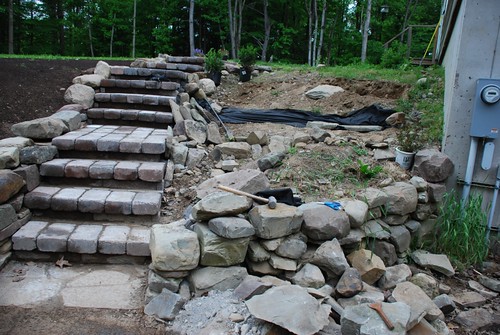 Now the steps were pretty much laid in and the bottom retaining wall was well underway. You can also see that we were FINALLY able to rake down the soil on the hill in the background – remove all of the stones – and cover it with a layer of top soil to prepare it for planting grass seed. 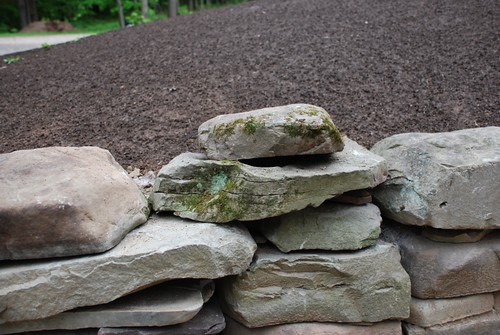 I love this close up of the bottom retaining wall as it was going up! Don’t you just love the character that stone gives! 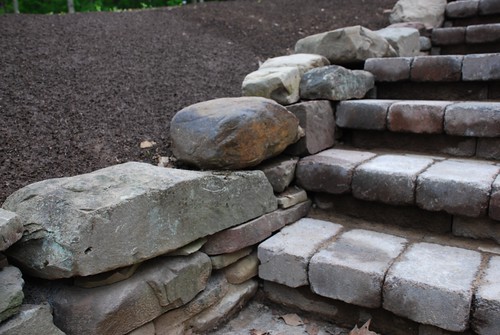 The work of laying out a stone wall is not some sort of science, but you do need to take your time & be sure that everything is sturdy & sound.

I love a more natural look to the garden, and wanted things to appear as though they had been there for a very long time!

So… we picked the rocks that would be visible very carefully.

I also LOVE to visit different garden centers & look through the clearance racks for special deals. Last year, I found 20 large boxwood plants for around $1.25 each! I decided to plant some of them between the steps & the cottage garden for a bit of color and structure. You can also see how I started tucking small plants into different cracks and crevices here & there that we left for that purpose. There are so many different varieties of little ground covers, herbs, and sedums that you can use for that purpose. 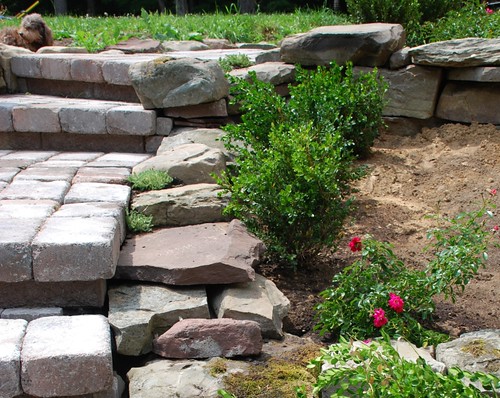 The ivy was another great find! Only $3 per flat, and what’s not to love about ivy & stones together! 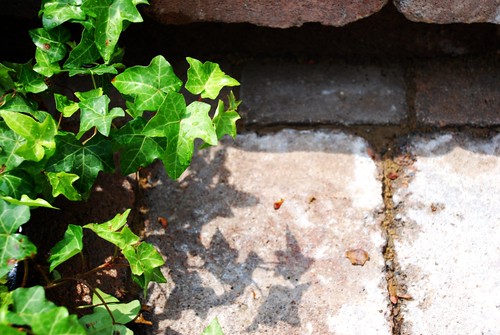 After lots of hard work, you can finally start to see things taking shape. I’ve designed the garden to have 4 different planting areas. 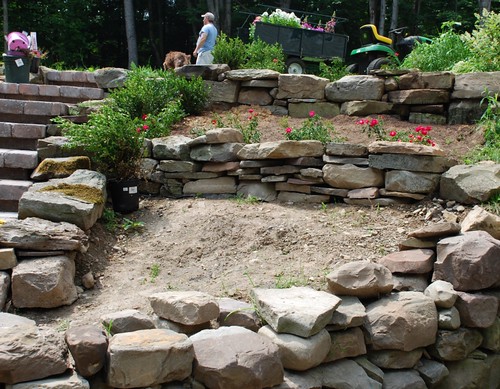 We loaded up some of my plant stash to take up to the planting beds. You can see that the wagon is filled with some of my favorite cottage garden plants! 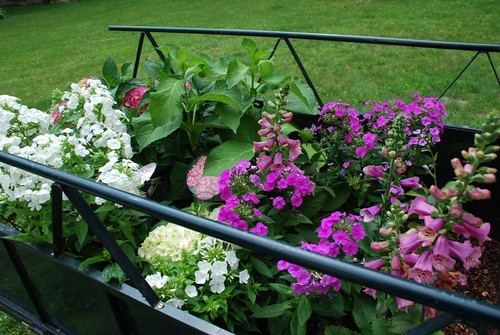 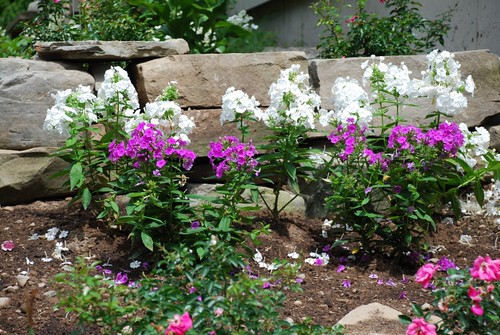 Behind each stone wall, there is also a nice bed of carpet roses. They will bloom all season long, and in no time at all will be approx. 4ft X 4ft… also draping over the stone walls just a bit! 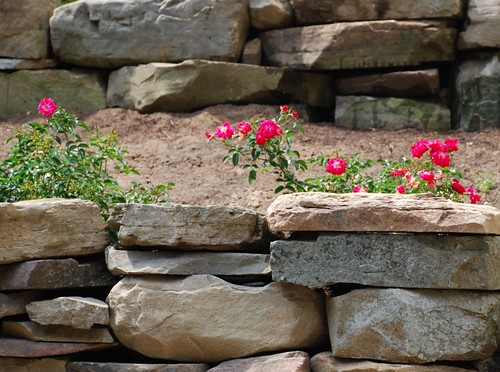 Have I mentioned that Foxgloves are some of my favorites! 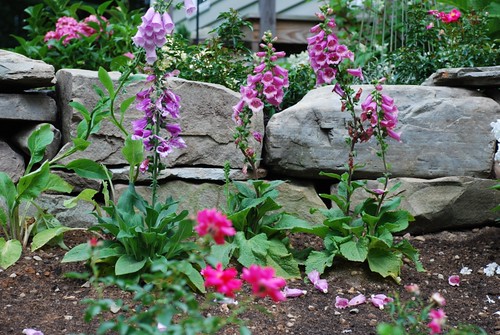 In the next tier down, I planted some miniature garden phlox. I’ve never heard of minis, so I’m really excited about these! I’ve also added some small iris for their nice color & shape. 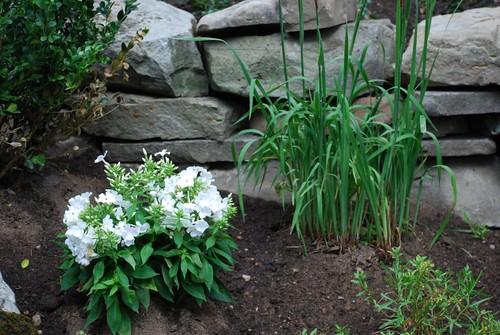 Another bunch of roses peeking out from behind the moss covered stones. 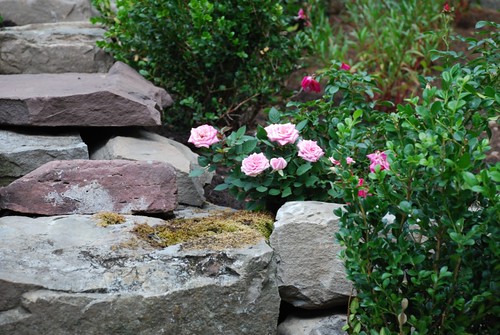 The large hardy hibiscus were another GREAT deal that I picked up this Spring. We stopped at a local plant sale, and because it was later in the day, they were trying to get rid of things that they still had left (nice tip for you… go to plant sales both in the morning – then go back later in the day ;).

I saw a big box of roots – marked hardy hibiscus. I asked her the price… normally they are selling for $4-$5 each because they are such nice big roots, but we will give you the whole box for $10! Sold! So… I bought the roots in the Spring, but because the garden wasn’t ready to plant until later, the shoots had already started growing – which explains their legginess. Next year… they will be nice & full! 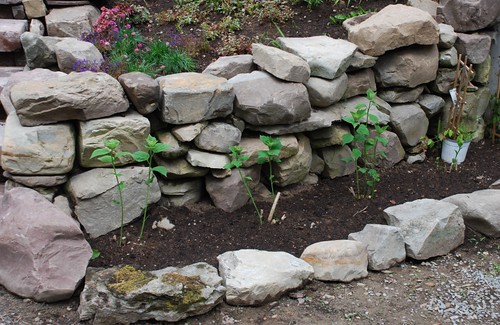 A few close ups of some of my plants
Saxifraga – my first ever… and I’m in love! The aroma is heavenly! 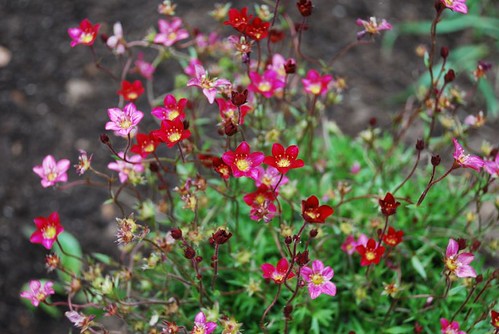 Ajuga – some people say…. oh be careful, that plants spreads so much… and I say… that’s exactly why I love it so 😉 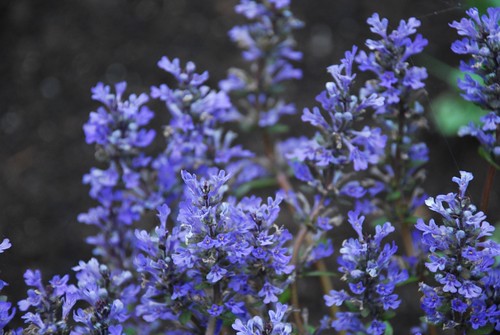 A couple of my pretty ladies (hydrangeas) from the upper level. 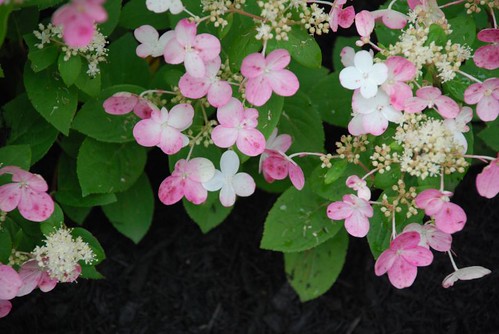 Because I am only planting shrubs in the upper level, I decided to mulch around them to keep the weeds down. 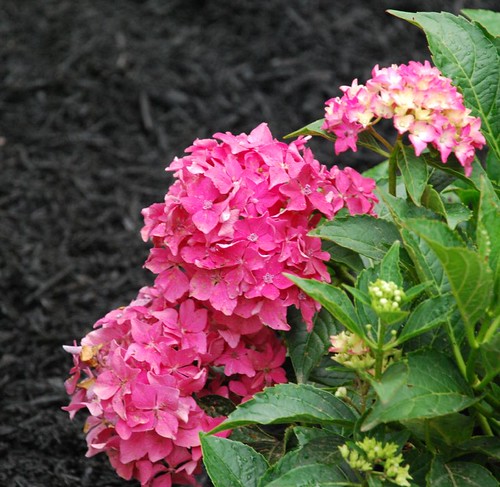 Another shot of the lower level 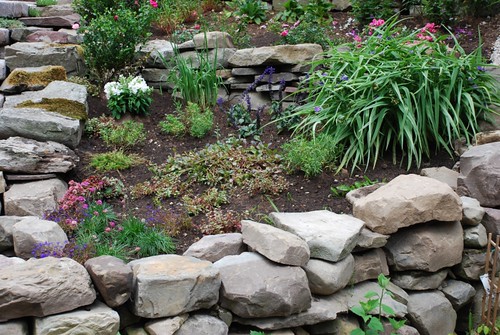 You might remember turtle girl from last year… yes… she’s back again!

This little lady comes to our hill each year to lay her eggs, and this year was no different! Hopefully we’ll see little babies coming out to enjoy the garden soon 😉 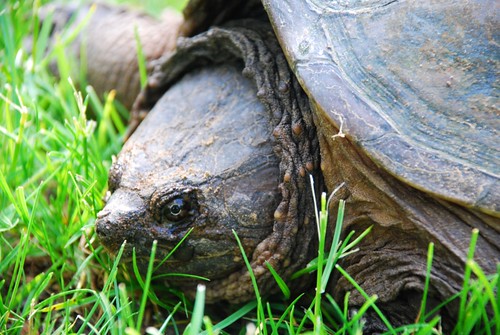 Even though our garden is only a few months old, we already see such growth in the plants, and we are all enjoying it immensely!

Was it worth all of the heavy work? You bet it was!

I will be sure to keep you up to date as to how this garden is coming along, as well as the other gardens that are currently under loving construction throughout the forest 😉