Some days are just meant for baking pies, and today is one of them!

We’ve been so anxious for apple season to get here, so as soon as we could, we picked up some beautiful honeycrisp apples! We’ve already been enjoying them as snacks with a bit of peanut butter, I’ve made a few batches of apple crisp, and today is pie day 🙂

If you’re like me, you have a special Pinterest board set aside just for the special dessert ideas that you want to try! Well, I’ve had a pin that I’ve been waiting to try as soon as apple season got here. It’s called Cider Caramel Apple Pie. I got my initial inspiration from Hannah’s pin below, and have added my own tweaks to it.

The pie has three parts to it – Crust, Cider Caramel, & Apple Filling

We’re going to start making the caramel, and let it simmer while we’re making the crust. You could also make it ahead & use it for other recipes as well.

4 Cups Apple Cider
1/2 Cup Brown Sugar
1/4 Cup Unsalted Butter (I used sweet salted, because I had it on hand)

Simmer cider in a heavy sauce pan until it reduces by half – approx 20 minutes (you can make the crust while it’s simmering)
Add sugar & butter, stir occationally & reduce again to approx 1 1/4 Cups – until it thickens slightly. Then turn of the heat.

Pastry Crust:
This pastry crust recipe was given to me by a friend – be sure to follow her on Instagram @pottersarms
She loves this recipe so much, that she doesn’t ever use any other! I can tell you, it was very easy to make!

2 Cups Flour (sifted or lightly spooned – if it’s packed it could come out dry)
1/2 Cup Butter – cold but soft
2 Tablespoons Castor Sugar (finely ground sugar – I just used my emersion blender to make reg sugar more fine)
1 Egg Yoke
3 Tablespoons Cold Water
* For pastry topped pies such as this one, simply double the recipe & keep the top half covered until ready to roll out & finish pie.

Mix flour & butter with fork or pastry blender until they resemble fine crumbs. Mix in sugar. Make a well in the center, and add egg yolk & cold water. Mix gently until it’s mostly together. With flour dusted hand, gently work pastry dough togehter. Don’t overmix, because the crust will be tough. Roll out gently on a lightly floured surface. Lift dough with your rolling pin, and place in pie dish removing excess. Place in fridge while making filling.
*To make a savory pie, you can simply leave out the sugar.

Mix spices, then mix in flour & sugar. Sprinkle over apples in the bowl & mix. Stir in vanilla & caramel, and pour into crust.

Roll out crust & top pie, crimping sides. Using a knife, cut 4 steam vents in the top crust. Beat 1 egg and brush on top of crust, then sprinkle sugar & cinnamon. Bake for 45-60 minutes – until brown & juices are bubbly. If the edges of your crust start to brown more than you’d like, simply cover the edges with some tinfoil for the remaining baking time. You must allow pie to cool before cutting, or it will be too runny.

I LOVE this cobalt blue pottery pie dish that my mom bought for me years ago! It was made by a local potter – Mr. White. 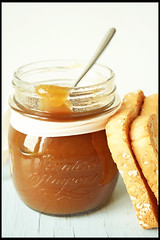 Hopefully I can encourage you to try your hand at this flavorful spread, when you see how easy you can make it in your own kitchen.

Wash apples & cook whole in a large pot with water. When very tender, push through a sieve – now you have apple sauce! No peeling, slicing, or coring needed!

Put all into a crock pot & cook on high for approx. 7 hours. Make sure the steam can escape when it starts boiling.

You can store in the fridge or freeze for later use. Canning would also be a good option. Fill jelly jars with hot sauce & process in a boiling water bath.

* Here’s a great gift idea – a gift basket with a breakfast theme. Include things like; apple butter, homemade bread, pretty bowl, coffee cup, coffee (make some of those different coffee mixes), tea, and homemade granola cereal. Wrap it up with tea towels and cloth napkins. You could call it – breakfast in bed.

Is there anything more delicious at an Oct. party than candy & caramel apples?! These tasty treats hold a special place in my childhood memory! Like cotton candy at a circus, candy apples hold the spotlight at any harvest party. 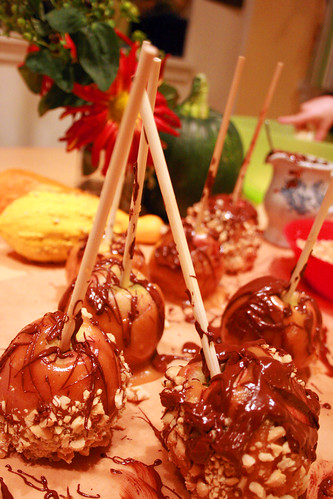 You’ll be so surprised at how easy these wonderful treats are to make! Get the whole family involved – they’ll never forget it!

Line a few cookie trays with wax paper to set your apples on to cool.

Choose your favorite apples – wash & dry.
Melt a bag of caramels in the microwave – watch & stir.
Insert popsicle sticks into the apples.
Dip & coat with nuts

Here are just a few ideas to make these apples extra special.

After you coat with desired coating, roll the apple in;

Enjoy this easy caramel apple recipe & make some memories for you and your family! 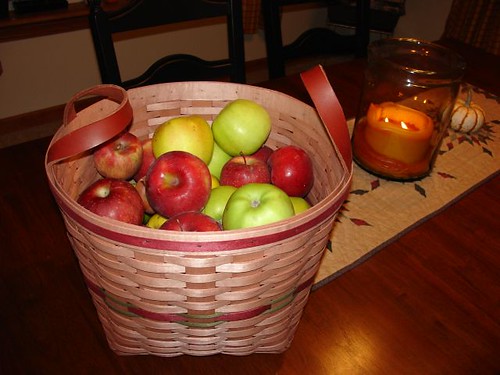 Autumn is the most wonderful, and brilliantly colorful time of year. Evenings are spent in front of the fireplace with a cup of cocoa, fuzzy slippers, grandma’s quilt, and fond recollections of the days events. This Autumn, as in previous years, our family spent a day at the apple orchard. Every year memories are made, not only in the picking itself, but in the wonderful dishes enjoyed by all – for months to come. Here are a few apple ideas for you.

Slice the apple in thin slices – across the middle (makes a beautiful star pattern). Hang them on a string & drape over mantle, or other area for decoration.

Arrange dried apples around a wreath for a great natural decoration. You can also bag them in zip locks when completely dry & use them as dried apples in recipes.

Cut apples into chunks
Put into large pot, with a bit of water in the bottom
Cook until soft, add cinnamon & sugar if desired
You can freeze the sauce in bags or containers, or can it.

Replace the oil & egg in recipes with applesauce – it makes a wonderful moist cake! According to Mott’s applesauce, by replacing 1/3 C oil with 1/3 C of their applesauce, a total of 608 calories & 73 grams of fat will be saved!

Make pie pastry, cut into rounds (with drinking glass) fill with 2 spoons of sauce. Fold in half, crimp edges, brush top with butter, sprinkle with sugar. Bake until golden brown.

Peel apples and cut into thin wedges. Sprinkle with sugar, and sprinkle a small amount of water around on the top of the apples. This helps the apples make a nice juice during the cooking process.

*Make large batch of this topping & freeze for later use. Use it to top – applesauce, ice cream, hot cereal, pudding etc.