With the season of feasting upon us, I thought I would share a new way of preparing the PERFECT turkey, that my
friend Sue shared with me! 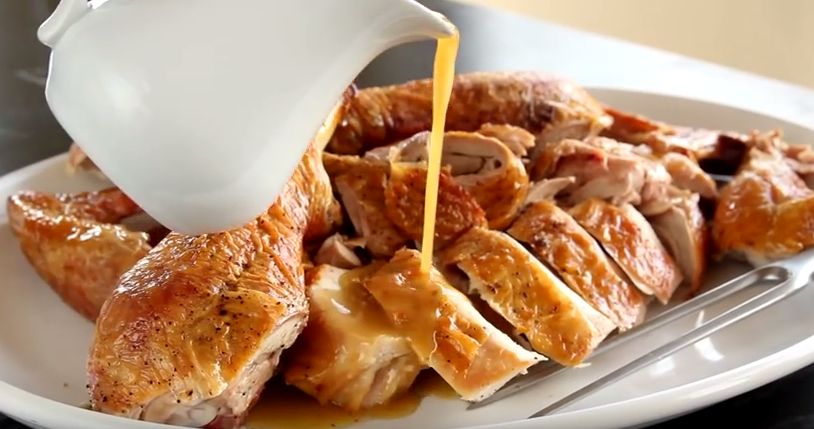 Wait a minute… is there really a perfect way to cook a turkey? What you need to find out is, what is the
perfect way for you & your family 🙂

If the thought of …
Juicy dark meat, as well as juicy white meat
All the skin being crispy, instead of half of the bird having soggy skin
Quick cooking times
Delicious juices to make gravy
Having a platter filled with beautiful slices of meat
And my personal favorite… not having to spend half the day picking a carcass clean to get the meat

Then you’ll love this cooking method!

Here’s a full video to teach you these “secret” methods 😉

Enjoy your feast… and the compliments on the juicy meat… and all the extra free time you’ll have!! At your first glance over this stuffing recipe, you might find yourself with at least one raised eyebrow. I know I did the first time I heard what was in this dish during one of our family gatherings. But, to my surprise, I absolutely loved it! As a matter of fact, everyone loved it!

To be honest, I just wasn’t used to having fruit as an ingredient in a main course, so I had no idea how tasty it was! Of course, my taste buds have certainly grown & expanded in the last few years, and I now enjoy all sorts of fruit, meat, and salad combinations!

This recipe is not exactly like the first one that I tasted, as I’ve added a few more “goodies” here & there.

Feel free to add, take away, or change amounts of any of the ingredients as well. My mother tells me that I am a lot like my great-grandmother Pearl, who never really used recipes or measuring utensils, but rather added different ingredients until it looked & felt right! So, with that being said, I hope you enjoy this special recipe!

You could buy pre-made bread cubes, or make your own with a loaf of your favorite type of bread. To make your own, simply break the bread into small bits (1-2 inches), spread on large cookie sheet, place in 250 degree oven for about 10 minutes – just to dry them out. Then remove bread & set it aside.

Brown the sausage in a large skillet, being sure to break it up into smaller pieces while cooking. Using a slotted spoon, drain the drippings from the sausage before you place it into a large bowl. Add the butter, onions, celery & celery leaves, mushrooms, and all seasonings to the pan & cook until tender. Add chicken broth and simmer for approx 5-10 minutes.

In the large bowl, add the walnuts, cranberries, and apples to the cooked sausage and mix well. Then, stir in the bread cubes and mix until well blended. Lastly, pour contents from the skillet into the bowl & mix until all the ingredients are coated & moist. You can add more chicken broth if the mix is to dry.

Place stuffing in a buttered baking dish, sprinkle with poultry seasoning, and bake until thoroughly heated and golden brown.

I know that you will enjoy this wonderful new twist to your traditional holiday dinner as much as we do! 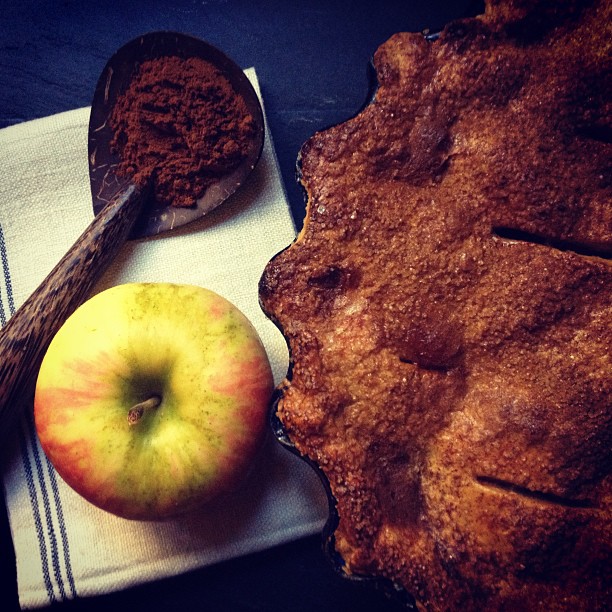 Some days are just meant for baking pies, and today is one of them!

We’ve been so anxious for apple season to get here, so as soon as we could, we picked up some beautiful honeycrisp apples! We’ve already been enjoying them as snacks with a bit of peanut butter, I’ve made a few batches of apple crisp, and today is pie day 🙂

If you’re like me, you have a special Pinterest board set aside just for the special dessert ideas that you want to try! Well, I’ve had a pin that I’ve been waiting to try as soon as apple season got here. It’s called Cider Caramel Apple Pie. I got my initial inspiration from Hannah’s pin below, and have added my own tweaks to it.

The pie has three parts to it – Crust, Cider Caramel, & Apple Filling

We’re going to start making the caramel, and let it simmer while we’re making the crust. You could also make it ahead & use it for other recipes as well.

4 Cups Apple Cider
1/2 Cup Brown Sugar
1/4 Cup Unsalted Butter (I used sweet salted, because I had it on hand)

Simmer cider in a heavy sauce pan until it reduces by half – approx 20 minutes (you can make the crust while it’s simmering)
Add sugar & butter, stir occationally & reduce again to approx 1 1/4 Cups – until it thickens slightly. Then turn of the heat.

Pastry Crust:
This pastry crust recipe was given to me by a friend – be sure to follow her on Instagram @pottersarms
She loves this recipe so much, that she doesn’t ever use any other! I can tell you, it was very easy to make!

2 Cups Flour (sifted or lightly spooned – if it’s packed it could come out dry)
1/2 Cup Butter – cold but soft
2 Tablespoons Castor Sugar (finely ground sugar – I just used my emersion blender to make reg sugar more fine)
1 Egg Yoke
3 Tablespoons Cold Water
* For pastry topped pies such as this one, simply double the recipe & keep the top half covered until ready to roll out & finish pie.

Mix flour & butter with fork or pastry blender until they resemble fine crumbs. Mix in sugar. Make a well in the center, and add egg yolk & cold water. Mix gently until it’s mostly together. With flour dusted hand, gently work pastry dough togehter. Don’t overmix, because the crust will be tough. Roll out gently on a lightly floured surface. Lift dough with your rolling pin, and place in pie dish removing excess. Place in fridge while making filling.
*To make a savory pie, you can simply leave out the sugar.

Mix spices, then mix in flour & sugar. Sprinkle over apples in the bowl & mix. Stir in vanilla & caramel, and pour into crust. 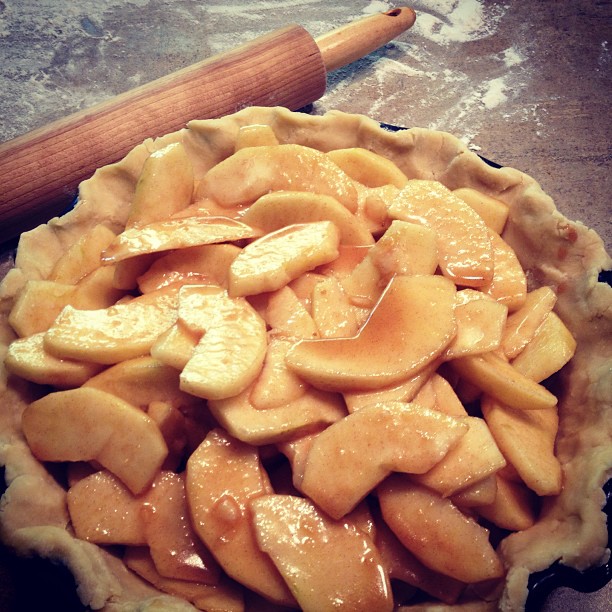 Roll out crust & top pie, crimping sides. Using a knife, cut 4 steam vents in the top crust. Beat 1 egg and brush on top of crust, then sprinkle sugar & cinnamon. Bake for 45-60 minutes – until brown & juices are bubbly. If the edges of your crust start to brown more than you’d like, simply cover the edges with some tinfoil for the remaining baking time. You must allow pie to cool before cutting, or it will be too runny.

I LOVE this cobalt blue pottery pie dish that my mom bought for me years ago! It was made by a local potter – Mr. White. 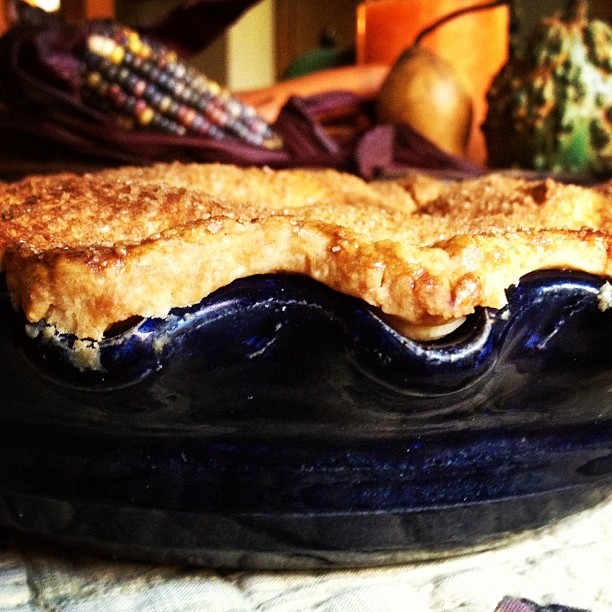 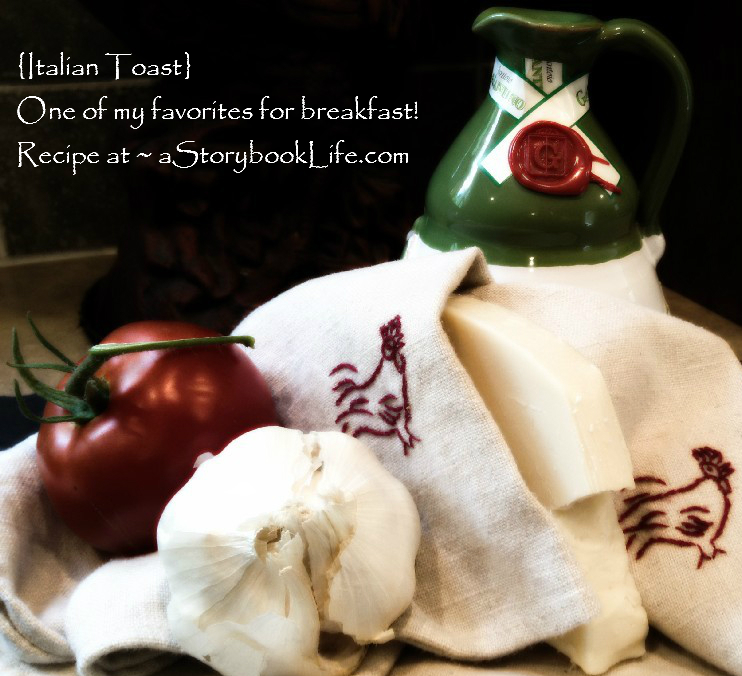 There’s something so beautiful about simple fresh ingredients being brought together, to create delicious
meals for our families.

There are some ingredients that I love & wouldn’t mind enjoying every day (I know you probably
feel the same way)! This recipe brings together some of those favorites, and I know that you &
your family will love it as much as we do!

We’ve enjoyed this simple little recipe for many years, and have affectionately named it “Italian Toast”. And,
although you may think of “toast” as being a breakfast food, this meal is equally delicious any time of day!

After you marinate the chicken covered in buttermilk for 2 hours, coat with flour mixture – then in beaten eggs – then back in the coating mixture.

Ingredients for the coating mix:

Use approx. 6 cups of grape seed oil or canola oil for deep frying

Here are some different ideas that you could use as a side dish for your southern fried chicken:

I think I can speak for anyone who has had the privilege of enjoying a meal at the Red Lobster restaurant by saying… their Cheddar Bay Biscuits (or garlic & cheddar biscuits as some call them) are one of the most delectable items on the menu! 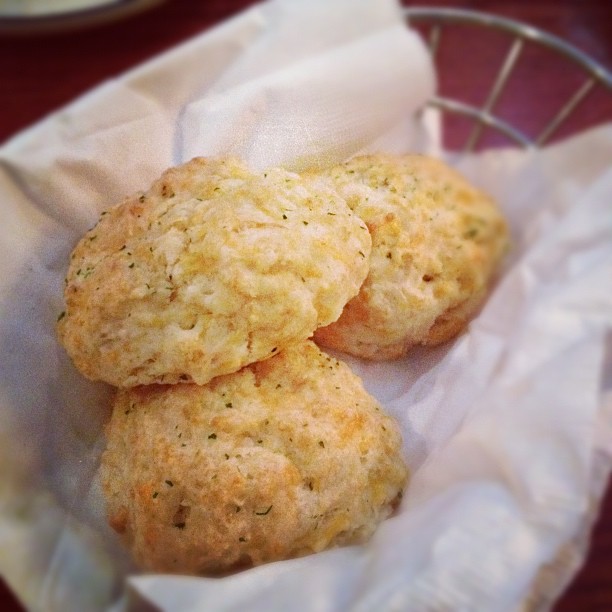 So… today I thought I would share a quick & easy recipe with you, to show you how you can enjoy a similar treat at home for your family dinners.

First, I wanted to include this how-to video from Kraft, to teach you how to make a really nice “basic” cheddar biscuit… just in case you don’t like garlic.

TIP: If you would rather use Bisquick, you could substitute the first 6 ingredients with 2 cups of Bisquick & ½ cup cold water.

Mix dry ingredients together, cut in butter and add cheese. Pour in milk a little at a time. After you pat out the dough & cut into squares (as in video), place on an ungreased cookie sheet. Bake in a 450 degree preheated oven for 10-12 minutes, or until golden brown.


Mix together these ingredients & brush on top. If you like a softer biscuit, brush heated topping on after you cook them. If you like more of a crunch, brush mixture on before you bake the biscuits.

** I at least DOUBLE this recipe for my big family 😉